The inspiration for this design is a wooden folk art figure of Guatemalan origin. The figure has several unusual aspects: she is wearing a garment that includes traditional Mayan motifs, one of her wins is upturned while the other points down, and she is looking up as she trumpets. After interpreting the figure in stitches, I planned to do the over six-over two Florentine pattern as the background, including some sparkly threads to bring out the original pattern to contrast the textured zigzag secondary pattern. While I was working on the background, I heard the words Jaroslav Vajda put in his poem about the Christmas angel, “…then tear the sky apart with light.” I decided to add the navy threads to the top and bottom of the design to show this torn-apart sky. 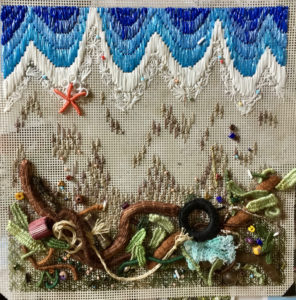 I have a teaching piece called Walking the Water’s Edge, and as I have taught it, I have paid more attention to the state of our oceans and the problem of plastics and straws. I have participated in a significant beach clean-up on a visit to Hawaii, and saw firsthand the devastation that our trash causes to beautiful beaches. So, I wanted to stitch that piece again from a different point of view. I used perforated paper in a granite color (that looks kind of like a beach). I stitched the same (mathematical patterned) edge of the wave, but used plastic thread that I made by cutting up white and blue plastic bags and stitching with that instead of thread. I mimicked the first 2-3 inches of my original wave with this new plastic thread on one edge of the new piece, and included eyelets to represent the foam, this time made with dental floss and tape. On the other edge of the new piece, I created the shrub/ground growth plants that grow on the beach. I used dimensional stitching: some needle weaving, Casalguidi stitch, detached buttonhole, long bullion knots. Then in those bushes and plants, I included some things to indicate the kind of debris, both plastic and rope, that gets tossed on the beach. Wrapped washers to represent “tires”, bugle beads to indicate straws, braided threads for ropes, dyed cheesecloth as netting. I wrapped an actual plastic straw and included it as part of the beach debris. Here are details: 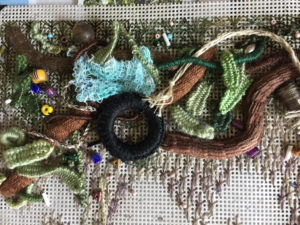 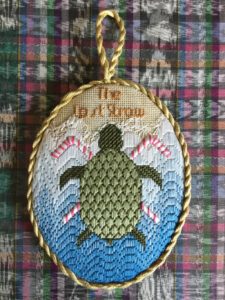 Clearly, I can’t resist a challenge….so when the San Francisco School of Needlework and Design’s Stitch-at-Home Challenge came along, I had to join in. Here’s how they explained this challenge:

“What’s your bag? We want you to be inspired by the art movements that defined the Summer of Love to express what matters to you now. We expect to be Feelin’ Groovy when you create an exhibition that joins your collective thoughts through the medium of needlework. Banners for your bag. Bags for your stash. Peasant blouses for your rags. Pillows for your pad. Words to blow your mind. Far Out. Join our Stitch-at-Home Challenge and be a part of a Human “Stitch”-In.” When you signed up for this challenge, you also received three skeins of DMC floss which you were required to include in your entry. So, I’m all about the straws, as you know all too well, so, here’s my artist statement for the final piece:

“Summer of Love included an awakening to ecological concerns for Mother Earth. Recently I have become more aware of the problem of plastic pollution in our oceans, particularly by single use straws. Grassroots organizations and individuals seem to be working on this issue across the country. I have come across the online article “Tyler’s Two Cents: The Last Straw” by Tyler Bernadyn, who works at his establishment in Rhode Island to address this issue. I liked the logo of his organization, and asked his permission (and he agreed) to adapt it to a needlework design for this challenge. I used the “Peace and Love” threads to create the waves and straw behind the image of a sea turtle, with the words “The Last Straw” stitched into the sandy beach.”

My piece was submitted and received, and hung out at the SFSNAD’s display wall during the month of September. When I got the piece back, I sent it along to Tyler for his establishment. Maybe if you’re in Rhode Island you’ll be able to see it when you buy a drink (without a straw!!) at his establishment! 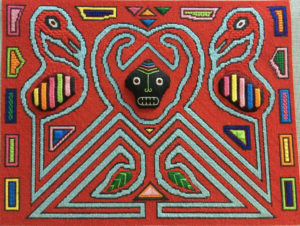 Women create a mola design by using the techniques of reverse applique, applique and inserted applique, and include symbols and figures that are significant in their culture. By attaching a yoke and sleeves as well as a back fabric, these molas become the front of blouses that Kuna women wear.

Typically, these designs include animals, birds, and plants familiar to the women creating the mola. It is common to see two birds on a mola, since women often work on these items with a friend, and these two birds are known as “gossip birds”. The vertical “slits” included in the design imitate the light that comes through the slits in the bamboo walls of a typical dwelling.

Because the original technique is reverse applique, it seemed that by doing canvas applique of portions of the design I could honor the original technique and make it applicable to canvas work. I wanted the feather sections of the birds to stand out so chose them for applique. I used small motif canvas stitches to fill in the “slits”, and used some woven stitches (Point de Tresse and Sprat) to fill triangles and create feathers.

My color palette is bright and represents the color palette of traditional Panamanian molas, which includes red, black and orange. The basic color scheme, of light blue and red-orange, is close to complementary. I have included other accent colors that are the some of the same as those I used other Central American textiles.  I chose a charcoal, rather than black, to make the accent lines.